Hrikesh Mukherjee’s films have always had a timeless relevance and beauty. So when my friend Rammesh – fondly known as KV – wrote a book subjectively exploring all 42 films of his, released between 1957 and 1998, it just walked into our section THE GOOD STUFF on www.mediabrief.com

About a fortnight or so back, my friend Rammesh – whom we fondly call KV —  reached out and delighted me with information about his book Human Cinema: The Films of Hrishikesh Mukherjee, published by Notion Press. I checked it out, and found it to be a film lover’s tribute to Hrishikesh Mukherjee, whose films have regaled film lovers across generations, with meaningful entertainment. 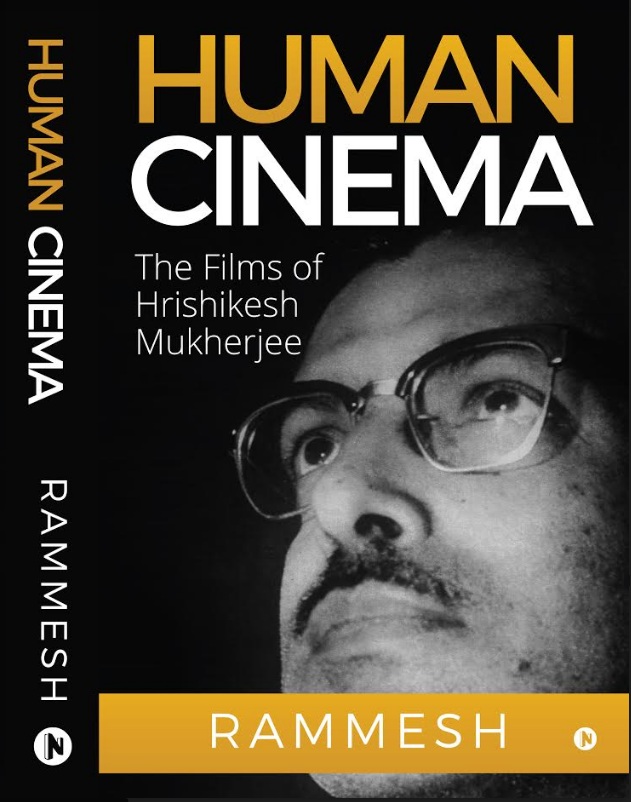 Anyone who has watched Hrishi da’s films, will agree they are of timeless relevance and beauty.

Which is why the relatively new generations and new generations of adults including baby boomers, millennials and even Gen Z, are lining up to be counted amongst his fans. For this, of course, thanks are due to the repeated telecasts across channels of his classic comedies such as Gol Maal and Chupke Chupke – one of my own  Top 10 Hindi films of all time – along with others.

The book has excellent subjective, impressionistic essays – what else can a film lover get except subjective — about the 42 films that were directed by Hrishikesh Mukherjee. Rammesh, as the inlay cover says, ”also looks at Mukherjee’s vision of humans, which he considers to be as important as that of Hrishi da’s mentor, Bimal Roy”.

This is a book any film lover, student or historian must buy – not only to savour a fan’s perspective in deep dive, but also  get a complete listing of all the Hrishikesh Mukherjee films released from 1957 till 1998.

Which is why, I’m featuring two excerpts from this lovely, conversationally written and opinion-driven read. You will agree it’s a labour of love from Rammesh.

But before we dive into the excerpt, reproduced with permission, of course, let me tell you something more about the author Rammesh – a friend and connoisseur of great music, movies and the finest of performing arts. Rammesh is a trained musician (Carnatic, Mridangam) and has also been an accomplished amateur singer. He is also steeped into music, film and military history, and mainlines on Jazz too. Today he is immersed in interactive musical presentations and discussions with similarly charged audiences. Rammesh also conducts solo Jazz music appreciation sessions in Pune, Mumbai and other cities, and all these and other activities have melody as a significant driver of a  full time, immersive  musical career. Oh, this is in addition to a regular 9 to 5 job as Business Manager in a mutli-national, selling medical equipment!

Oh, and here he is, conducting a Jazz appreciation session with music lovers in Pune. 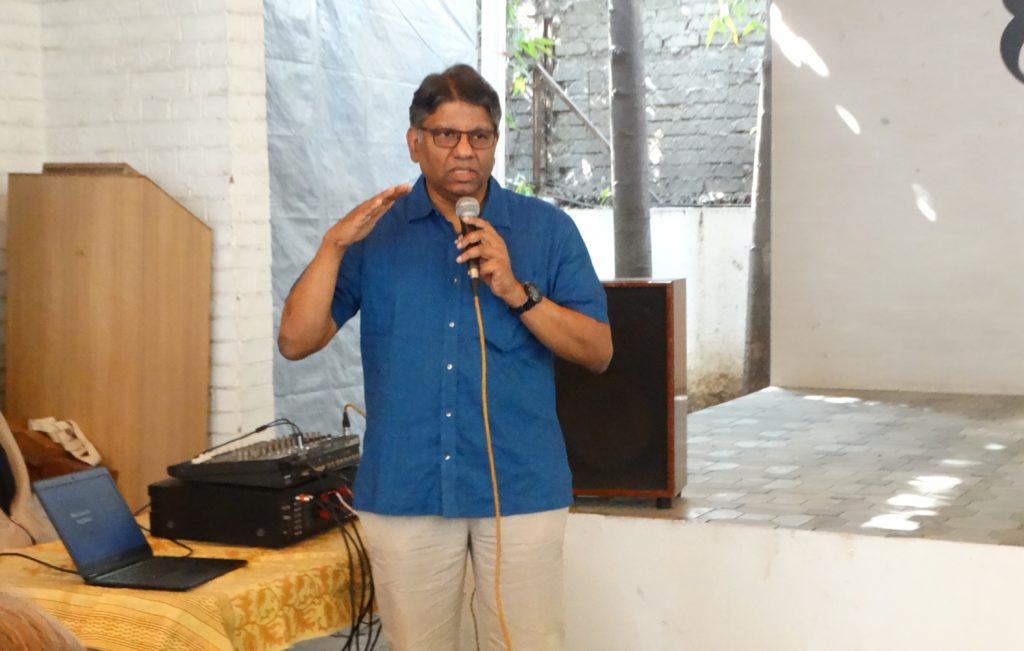 Rammesh’s excellent musical insights add great value to the book, and its appeal for music and film lovers.

In this, the first of two extracts being featured, we look at a snapshot of the 1960s. Here it is, excerpted from the book Human Cinema: The Films of Hrishikesh Mukherjee, written by Rammesh. KV to me – Pavan R Chawla

Excerpt from Human Cinema, by Rammesh

The 1960s saw Shammi Kapoor, Rajendra Kumar, Biswajit, Pradeep Kumar, Joy Mukherjee and many other new entrants become highly successful stars. Most of them worked in strictly formulaic musical entertainers whose main asset was the simply outstanding music from a variety of music directors, giving great music. Shammi Kapoor started a new type of on screen style, the dancing hero who was a caveman when it came to pursuing the heroine, which was a refreshing change from the style of The Big Three.

Throughout the 1960s, Hrishida continued with his own unique style of Human oriented films, but went “mainstream” from time to time with films that ranged from crass to class.

This started a new trend where every new hero had to be a good dancer, too, ensuring the oncoming popularity of Jeetendra to current day stars. These heroes of the 1960s were ably aided by the playback singing of Mohammed Rafi and to a lesser extent, Kishore Kumar and Mukesh. Mohammed Rafi more or less dominated the 1960s as he adapted his voice to the individual persona of the stars. It always felt as though the Star was singing because of the the of Rafi’s voice.

The West and its latest fads did impact Indian films in one way or the other. The explosion of Blues and Rock ‘n’ Roll combined with the worldwide Beatles mania of the early 1960s resulted in the introduction of the Western trend of “twist” and many hit films had at least one song which was a “twist” song. Next, the obligatory club dance gave rise to ‘cabaret songs’ with the vamp or the villain’s moll dancing, wearing increasingly risqué costumes.

The old guard of music composers scoffed at the new upstarts, but couldn’t deny that the times were changing and so were ‘public tastes.’ Though the West did dominate to some extent, Indian influences were not completely absent as proven by musical hits such as Dosti (1963), Phir Wohi Dil Laya Hun (1964), Taj Mahal (1965) and so on. A few films in the early 1960s were partially in color, given the cost of color stock, but soon, everyone went full color with gusto.

Today, color films of the 1960s seem very gaudy as primal colors, gaudy sets, seemed to be the rule than the exception. Subtlety was hardly a hallmark and loudness was the rule. New heroes and heroines were entering the fray and The Big Three of the 1950s were either slowing down or being very choosy.

The nation was also changing. The 1962 Indo-China War, in which India was soundly defeated by the Chinese, came as a rude shock. It didn’t figure in world events as the world was watching the sickening countdown to nuclear Armageddon in the Cuban Missile crisis which coincided with the Chinese attack.

Jawaharlal Nehru, Independent India’s first Prime Minister died in 1964. The new Prime Minister Shastri’s rallying cry ‘Jai Jawan Jai Kisan’ sadly withered with his early death in 1966. The inconclusive 1965 Indo-Pak War found India accepting that there would never be a peaceful neighbor on its Western borders. The anti-Hindi agitation in Tamil Nadu, the creation of language-based states, the splitting of the ruling Congress Party; all these and more spoke of a nation in turmoil and still trying to find its feet.

But the mainstream commercial films didn’t reflect these events. Except for the highly realistic Haqeeqat, India’s best ever post-Independence war film which showed India’s defeat at the hands of the Chinese, it was fantasy time all the way. The climactic battle of Haqeeqat looked entirely filmy as if to build Dharmendra’s ‘macho’ credentials, till the story of Major Shaitan Singh’s battle at Rezang La came out.( Major Shaitan Singh and his company of 114 soldiers (out of 123 soldiers), from the Kumaon Regiment, were killed while defending against hordes of Chinese troops)

Aided by a brilliant soundtrack and perhaps THE GREATEST patriotic song of Hindi films ‘Ab tumhare hawale watan saathiyon,’ Haqeeqat was one of the few mainstream Hindi films to reflect contemporary realities and was one small drop of reality in an ocean of fantasy. The other major elements in Indian cinema, ‘the mythological,’ which was also well set, though popular in the 1950s, were slowly declining. C-Grade stunt films such as Tarzan comes to Delhi (!) and similar titles had a ready market and these too didn’t reflect any contemporary realities, fantasy being a better substitute for reality.

Sangam (1964) started the trend of the craze for foreign locales in Hindi films. Raj Kapoor did it in grand style and showed France and Switzerland in color (there had been Singapore – 1962 –  with Shammi Kapoor and Padmini, but that had been in black and white) opening the floodgates for other filmmakers.

For no rhyme or reason, part of the film had to be in foreign locales, preferably the West, but that didn’t prevent a Love in Tokyo being made in the exotic locales of Japan. Titles such as An Evening in Paris, Night in London, etc brought the audiences to the theater to gawk at the foreign locales which they could ‘visit’ for a few rupees. There was even A Spy in Rome, not to speak of Johar and Mehmood in Hong Kong.

The common ingredient in these movies, in addition to the locales, was, of course, the music that ranged from the chartbusters of An Evening in Paris and Love in Tokyo to the largely unknown, but still melodious songs such as a Rafi number ‘Rome ki vaadiyon se do dil guzar rahey hain’ from A Spy in Rome. Surely the latter title was a result of the James Bond and other spy film mania of the 1960s which sparked yet another sub-genre, the Indian ‘spy’ film.

The Indian spy film copied most of the Bond elements mainly guns, girls, gadgets and some unspecified megalomaniacal ‘Desh Ke Dushman’ with faintly oriental features who were after some secret ‘faaarmula,’ (most Hindi film villains would pronounce it thus_)  which could destroy India. Farz, Aankhein, Yakeen, Kismet and a host of others drew the audiences into this craze and most of them had chart-busting music and were authentic hits. Another minor sub-trend was the ‘ghost suspense film’ with Woh Kaun Thi being the best example of that genre.

As the decade drew to an end and Rajesh Khanna burst onto the horizon with Aradhana (1969), mainstream commercial filmmakers went into self-congratulatory mode because they now ‘knew’ that their precisely calibrated formula of music, dance, melodrama, fantasy and more melodrama were the vital ingredients for the greatest measure of success in the 1950s and 1960s – The Silver Jubilee.

The 1960s counterculture of the West and its aftershocks had yet to travel to India.

Throughout the 1960s, Hrishida continued with his own unique style of Human oriented films, but went “mainstream” from time to time with films that ranged from crass to class.

In the 1960s, there were at least five films that clearly demonstrated his unique view of what makes us Human and in a couple of cases even question our humanity. An artist was coming into his own, following in the illustrious footsteps of his mentor and master, and creating cinema which was similar in style if not content.

Hrishida’s films of the 1960s are ample testaments to his mastery in balancing between the commercial, the artistic and the line in between. Potboilers, classy comedies, simple Human tales – all these and more were on offer. The disciple of Bimal Roy was coming into his own!

Next: Rammesh’s essay on, not Chupke Chupke, but Chhaya, an emotional, masala-packed film produced by the South’s AVM.