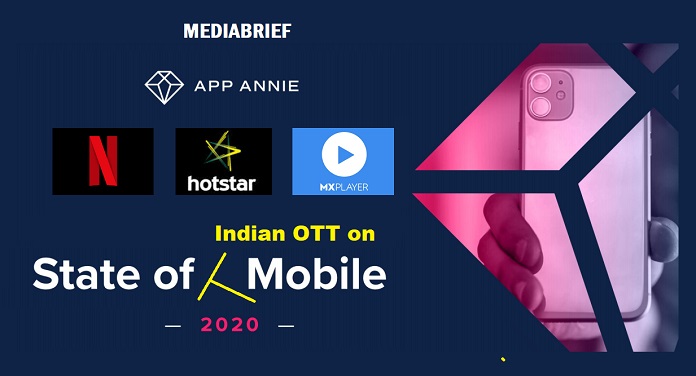 The App Annie State of Mobile Report 2020, throws interesting light on the space of the streaming (OTT) platforms in India. There is not a single Indian OTT app that features in the Top 10 most downloaded apps’list. However, MX Player is the #1 amongst Indian streaming apps (at #7 in the Top 10 in India) by Monthly Active Users, and  Hotstar is the only other OTT app in India (at #10 in the India Top 10 under the same category).

Congratulations to 3 OTTplatforms from India on @appannie's India Top 10s list: @NetflixIndia #2 and @hotstartweets #6 in India Top 10 by consumer spends, and @MXPlayer #7 and Hotstar #10 by MAUs Click To Tweet

The fact that two OTT platforms feature in the Top 10 apps per MAU, indicates the strong engagement levels of the apps, because neither of the two features on the Top 10 list of most downloaded apps. 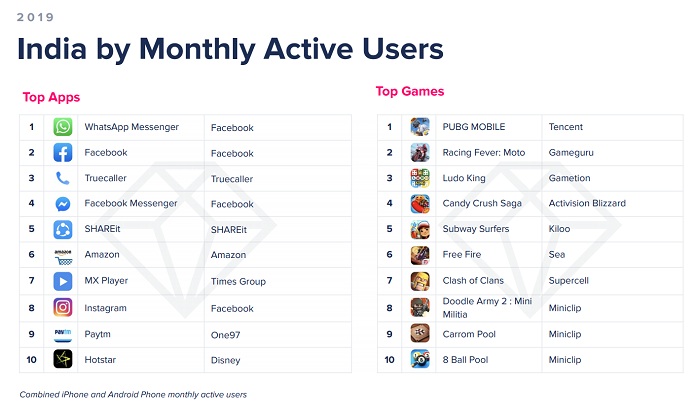 The India list of Top 10 apps of 2020 by consumer spends tells another story about the OTT space. Netflix, which wasn’t on either of the two preceding lists (Top 10 most downloaded or by MAU in India) is at Number 2 in India Top 10 by consumer spends, and Hotstar is at #6 on the list.

On robustness of app audiences and consumer spend, given the incomparably larger user and MAU base, Hotstar seems to occupy pride of place in the overall OTT pecking order, though Netflix’s ARPUs should definitely be significantly higher than, but then its far smaller user base is right up there, throwing a spanner in the overall feel-good works.

Does Netflix’s much smaller download numbers in India when compared with its fabulous performance on the global downloads Rankings (#9, after Snapchat and ahead of the 10th-ranked Spotify) reveal the need for sharper marketing in India, because although it doesn’t feature on most downloaded with most MAUs on the India lists, the fact remains that whoever is active on the app after a month is necessarily a paying member, and in both, the global and Indian markets, Netflix is a solid #2 on consumer spend.

With its mobile plan offerings, the smaller, high-growth markets across Tiers 3 and even 4 — don’t write off awareness and aspiration! — it’s definitely going to be a strong growth curve. Of course, with Disney movies and other titles including its most popular TV series set to exit the Netflix library, there would be challenges, but the opportunity definitely looks much bigger by far, because they’ve already announced massive investments on content in India, and Reed’s team is working post-Haste on that and much more. Show us a more aggressive and focused streaming visionary that Reed Hastings, and Snopes will most likely flag it up.

Overall, the biggest players in the Streaming space will be, in our view: Hotstar, Netflix, Voot, ZEE5, MX Player, SonyLIV,  Amazon Prime Video and YouTube. And wait for that other biggie, Disney Plus, which has already created a massive user base in the US by being present in the consideration and use mix of 25% of the active Netflix user base there. For an OTT service that launched as recently as November 2019, Disney Plus has made long strides to capture mind- and market share amongst the most premium OTT subscribers in the US. Also check what kind of overlapping has been happening by other OTT apps with Netflix users, in the figure below: 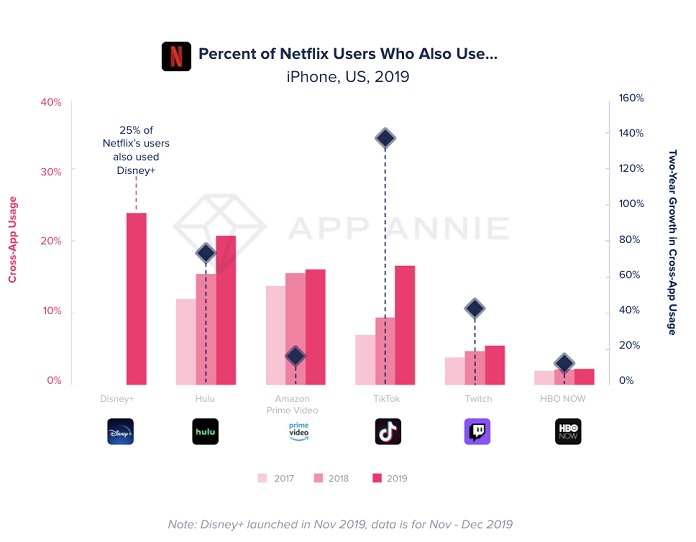 And don’t forget TikTok – the video content creation and consumption app that’s topped the India Top 10 list by Most Downloaded.

Referencing the US again, TikTok is growing geometrically there, as it has in India. On Average Hours spent per user amongst select Video Streaming apps per App Annie data in December 2019: 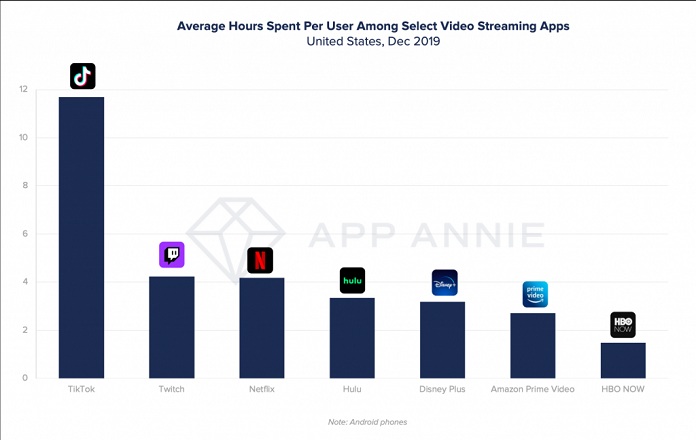 TikTok is the clear favourite amongst Gen Z there, and this consumption trend too, like most tech trends that reach India after the international fact, as it were, is mirroring the same. GenZ is a hit here too, and these youngster will soon become earning young millennials, so conversion and retention throught continued engagement, platitudinous as it sounds, will always remain important.

The regional OTT players are definitely incomparably smaller players, and if one were to consider that only around 10-12 million paying customers hold around 20 to 25 million subscriptions, we’re still scratching the tip of the iceberg. And of the requirements to stay, pardon the pun, afloat.  While SVOD has far higher ARPUs, the much larger AVOD base makes for a future-proof offering.

Major broadcasters and app owners will likely concentrate very strongly upon smarter marketing, better content, and AVOD to garner greater numbers. ZEE5 (Yogesh Manwani) and Voot (Akash Banerji, who helped create the category in India with the launch of Hotstar, too) already have dedicated leaders of their AVOD businesses. AVOD will further open up large swathes of the markets across all tiers. Most likely, in every major player’s pitch to the market, AVOD will have a large part. With the exception of Netflix. So the three priorities for all OTT Players will remain: Original content, lower marketing costs, and the coopting of advertising-supported content, or AVOD, in the mix.

While we haven’t heard from the other OTT platforms, MX Player did reach out. The platform has dominated the market in terms of time spent on Android phones among Entertainment or Video Players & Editors.

MX Player’s focus on 360-degree entertainment seems to have driven the platform to the top of India’s over-the-top (OTT) video entertainment segment, although it has considerable distance to cover on consumer spends. Also, don’t forget that MX Player has been available in India for download as a pure vanilla standalone – but excellent – video playing app for several years before it was acquired and relaunched in its spanking new avatar by the Times Group. However, post the acquisition, MX Player’s audiences have only grown. At present, MX Player has 280 million MAUs globally and 175 million MAUs in India. And once they can decide on their primary-focus  revenue- and content acquisition models, there should be no looking back for the app. Again, don’t forget the great stature, reach and connect of its media powerhouse parent.

Along with offering premium video content, we were the only app to introduce music streaming as well. We’re now adding other avenues of entertainment to the platform – the beta launch of our gaming feature has received tremendous response: Karan Bedi – MX Player 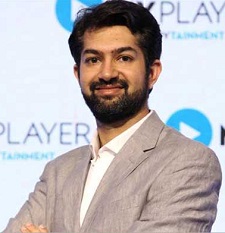 On the success, Karan Bedi, CEO, MX Player, said, “We are very excited to have come this far in such a short time. This has been on the back of great content like Queen and Hello Mini as well as a great product.

“Our aim,” said, Bedi, “has always been to emerge as the preferred destination for all things entertainment;  along with offering premium video content, we were the only app to introduce music streaming as well. We’re now adding other avenues of entertainment to the platform – the beta launch of our gaming feature has received tremendous response and given how gaming has become mainstream in India in the last two years, it was a natural fit for our audience. Here on, our plans include expanding our footprint in international markets as well,” Bedi said.

Additionally, the report says, competition in the video streaming space will bolster better user experiences as well as better and much more diverse content to drive growth in downloads, usage, and revenue. 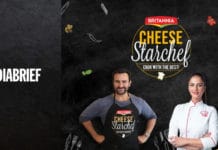 Saif Ali Khan sets out to become a ‘StarChef’ 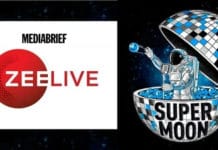