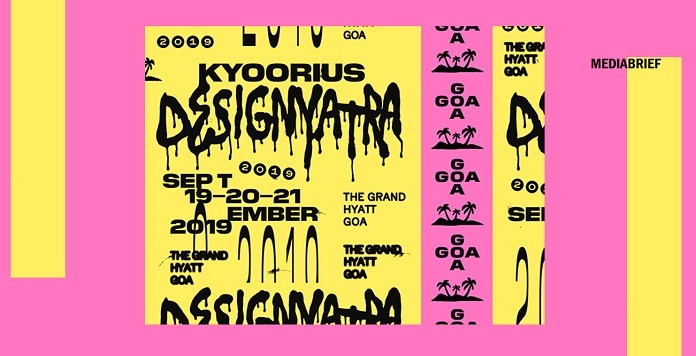 Living legend David Carson closed the first day of Kyoorius Designyatra 2019 with a riveting retrospective of his impressive career. Carson’s boundary-breaking typography in the 1990s, in Ray Gun magazine and other pop-cult books, broke the traditional sensibilities of what type on print demanded from a reader, and left the 1,050+ delegates inspired with his journey.

Day 1 of India’s biggest design conference also included stellar long-format talks from American illustrator and muralist maverick Timothy Goodman, who used his projects to talk about finding his own voice.

Interactive designer Kelli Anderson explored how design can harness invisible forces in the world. Known for her design, animation, illustration work and projects including a paper record player, Kelli wowed the delegates at Kyoorius Designyatra 2019 with several examples of contrarian thought.

The first day of Kyoorius Designyatra 2019 also saw Indian designer Ayaz Basrai, who took the delegates through the various works and ideas from his design studio, The Busride.

This year’s theme, ‘On The Contrary‘ celebrates contrarianism, and brings together 25 global speakers over a period of three days to Goa, India.

Rajesh Kejriwal, Founder CEO of Kyoorius,  says, “The 14th edition of Kyoorius Designyatra allows the participants to not only discuss the latest trends in creativity, brand, design and digital but also creates a unique pool of varied creative minds from across the world. The stimulating lectures and workshops encourage the participants to not only think innovatively but also not to be bound by the barriers of age, experience and backgrounds.”