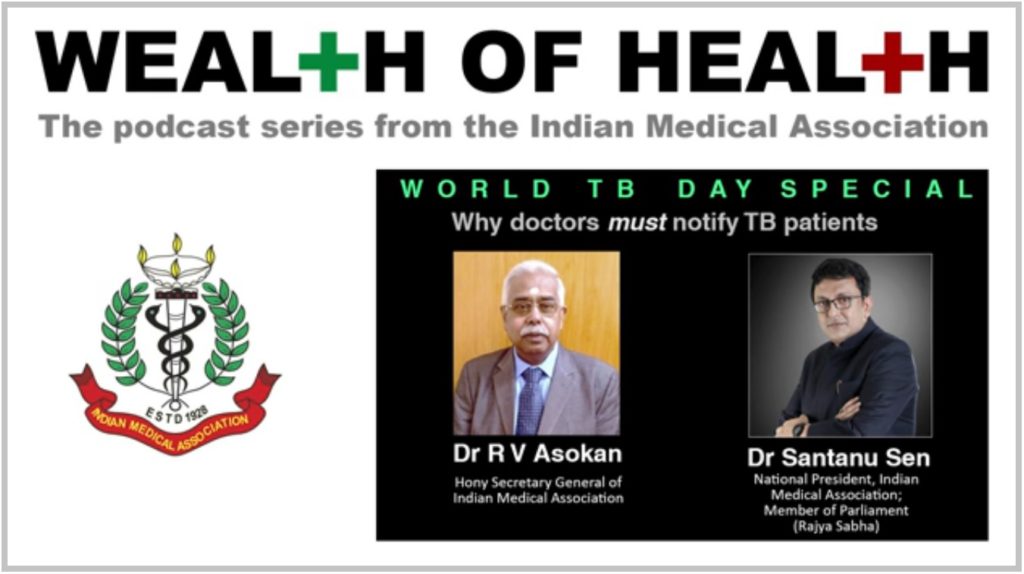 On World TB Day, which was on Sunday the 24th of March, the Indian Medical Association, which is the only representative voluntary organization of Doctors of Modern Scientific System of Medicine, and which looks after the interest of doctors as well as the well being of the community at large, launched a podcast series — Wealth of Health. To our mind, the IMA is probably the first representative,  not-for-profit voluntary body that has launched a podcast. For a body that was created way back in 1928, this is definitely an extremely progressive initiative.

Wealth Of Health – the Podcast series from IMA

The launch episode of Wealth of Health features Dr Santanu Sen, National President of the Indian Medical Association and Member of Rajya Sabha, along with Dr R V Asokan, Hony Secretary-General of the IMA, and Chairman of the national End-TB initiative.

Tuberculosis is a widespread airborne disease that has been a scourge across the country – one that the Indian government is determined to end by 2025. In this new podcast series, Wealth of Health, Dr Sen and Dr Asokan discuss why it is critical that all doctors notify TB patients with the concerned authorities so that the government’s stated objective — to end TB from India by the year 2025, is met.

Episode 1 of the Health Of Wealth Podcast series from IMA is about a serious topic, and even as they discuss it with all the gravitas it demands, Doctors Sen and Asokan have done an excellent job, keeping the proceedings smoothly conversational, which helps make the episode both, engaging and informative, and takes the important narrative ahead easily and unobtrusively.

The IMA Podcast Wealth of Health is on most major podcast directories:

What’s laudable about the way the Indian Medical Association functions is its progressive outlook and proactive push for newer platforms of content delivery to reach its target audiences.

A podcast has some great advantages, and is a yet under-used device which has great potential.

Podcasts are the new and growing, non-invasive medium of passive but attentive communication. A remarkable attentiveness measure according to Edison Research, is that 85% of people who listen to podcasts, listen to the end.

Podcast penetration is strongest among the 18-34 demo, which can be difficult for many marketers to reach through other media.  The average podcast duration and ad length is much longer than traditional ads.

In India, says a journalist who covers podcasts for The Hindu, what will work well with podcasts is ‘more variety…more creative non-fiction on the lines of This American Life or RadioLab, and better interview shows… We also need to have better sound design, more attention to voice quality and delivery style. We already have a listening culture – everyone listens to music – so it should not be too hard to get our audiences to attune themselves to listening to the spoken word.’

So, a podcast is the most non-invasive and least demanding of message delivery platforms. It is just audio that anyone can listen to while driving, or commuting to work, or in their free time, or also while doing something that allows them to listen to audio while they work. It is a piece of content that doesn’t have to physically rest on a listener’s device. A link to a Podcast hosting platform, plus a link to the YouTube repository of the simple video will do the trick. Good podcast hosts are not data-hungry and can stream audio pretty smoothly, and YouTube – well, there’s nothing that’s quite as ubiquitous as it.

Also, a podcast is a great piece of content that the digital marketing team can use to spread the word across target audiences through posts on LinkedIN profiles and groups, Twitter, Instagram, Pintrest and Facebook pages. Another excellent platform is YouTube, where a podcast audio file can be converted into a simply packed still-frame graphic so that it may be shared across all social media profiles, and, the case of the IMA Podcast episode on TB Notification,  can also tag and include some of the best social influencers, and journalists and editors who have been writing with missionary zeal to help alleviate disease across the country. It’s a great cause, after all, and such committed and distinguished individuals and the corporates they represent would surely help take up and pass on the baton in the never-ending relay of information that is definitely called for.

As Dr R V Asokan says in this podcast, “Why a podcast, you might well ask. Well, we at the IMA believe we have  a big responsibility, and want to use every medium to reach out to our valuable audiences – both, doctors and other medical professionals, and above all the patients who need proper access to the best of medical facilities and care.”

And so, as a progressive industry body, the Indian Medical Association went ahead and is now perhaps the first industry body in India that has created a podcast series.

Recording, editing, mixing and remixing, packaging and mastering – in fact the entire process of producing a single podcast episode – is a time-consuming task, which must have made big demands on the time of its National President Dr Santanu Sen and Honorary Secretary-General Dr R V Asokan. But here they are, with their first episode, speaking about the need to notify TB patients, why it is crucial, the reasons patients are reluctant to be notified about to the government authorities, and how the TB notification process can not only be brought up to speed, but is also being helped by the government.

In fact, IMA National President Dr Sen says, in the podcast, “On behalf of the Indian Medical Association, we urge you to not only listen to, but also share our podcast episodes with doctors and other medical health professionals and members of the society.”

So, Episode 1 of Wealth of Health, the IMA’s Podcast series, is an excellent piece of content that should definitely help spread the word about the need for TB notification. 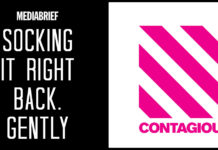 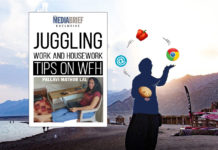 The Times of India Group and The Dainik Bhaskar Group, along...