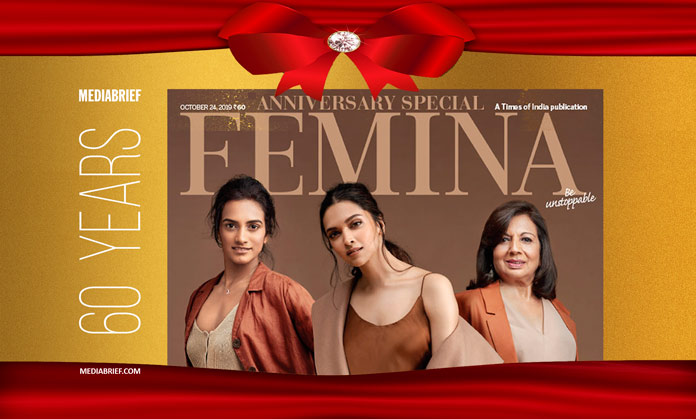 Women’s magazine Femina marks its 60th year this October through a power-style-statement of representing evolution and change. It also charts a path for its next 60 years through #TheNext60 campaign. 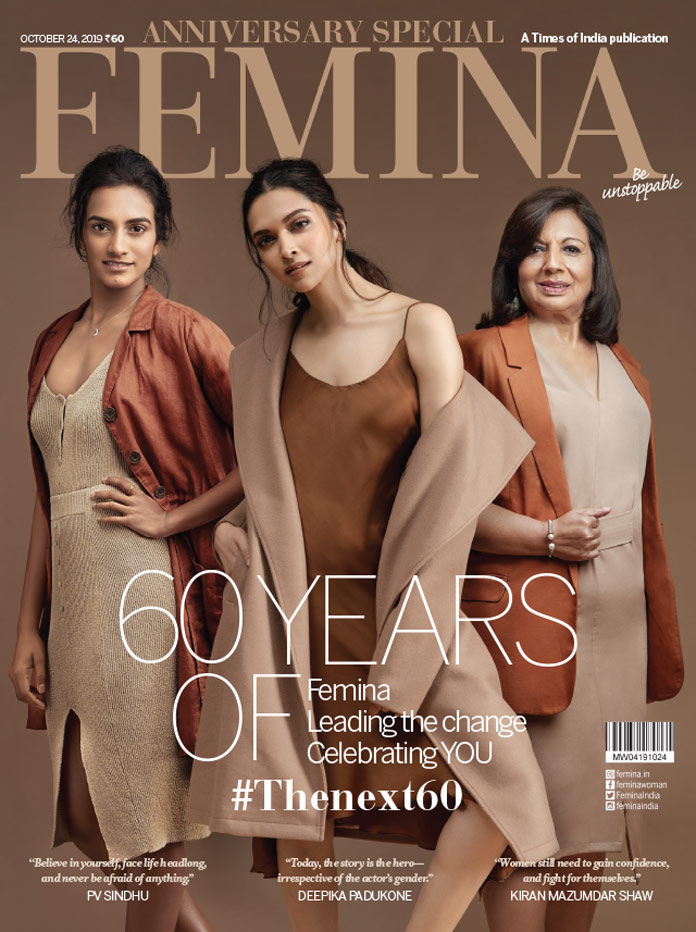 To amplify the message, women of substance in their respective fields – Deepika Padukone (Actress), P.V. Sindhu (Indian professional badminton player) and Kiran Mazumdar Shaw (Chairperson and Managing Director of Biocon Limited and philanthropist) have come together to power-pose for their favorite brand.

The issue highlights some of the most-defining moments in the six decades for the loyal Femina patron. They include inspirational stories that gave them choices and empowered them, the revolutionaries that inspired them like PT Usha or Indira Gandhi; the ones that showed them global prowess

2 campaigns for 60 years of Femina

On the 60th anniversary, two Brand campaigns #oneamongus and #thenext60 have been launched. The former highlights achievers describing their past and present background, while the latter speaks in depth about the future.

#OneAmongUs is a brand campaign that celebrates twelve famous women achievers across various walks of life describing their then and now scenario.

The list of these women includes actress Deepika Padukone, who was then an Aspiring Model and is now India’s Heartthrob. Actress Vidya Balan, who was then an eternal optimist and is now one of the leading ladies in Bollywood, Bachendri Pal, who was once a rural dweller who became the first Indian women to reach the Summit of Mt. Everest. The list also includes achievers like Priyanka Chopra, P.V Sindhu, Avani Chaturvedi, Hima Das, Kiran Majumdar – Shaw, Devi Murthy and Aarushi Batra. 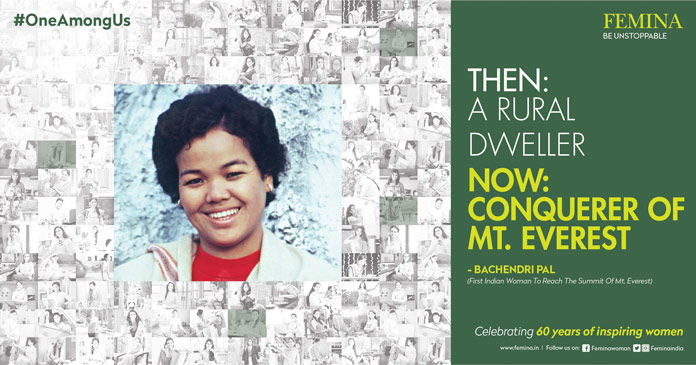 #TheNext60 is going to be an extensive campaign that will engage people from different walks of life through innovative initiatives like, 60 Kids take over 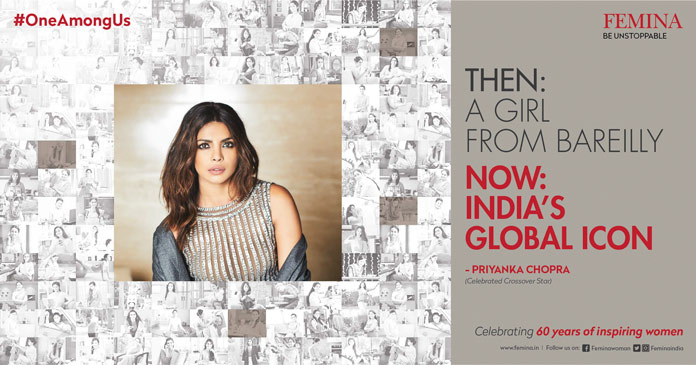 Femina’ where kids narrate to the guest editors what they expect the millennials to do right for the next generation. 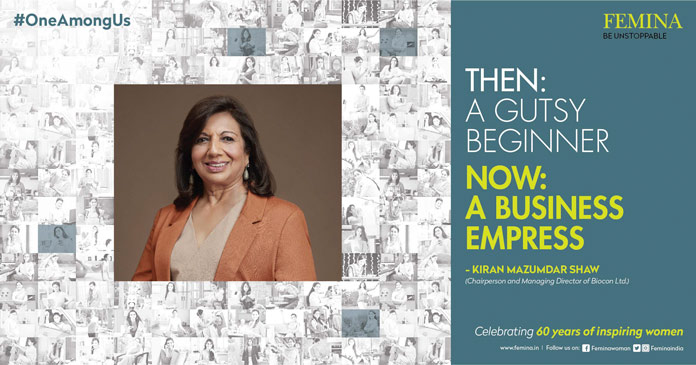 Apart from this, the brand will also explore engaging social media posts like 60 days of giving (2 months long give-away) and major throwback pictures of best covers and cover girls. 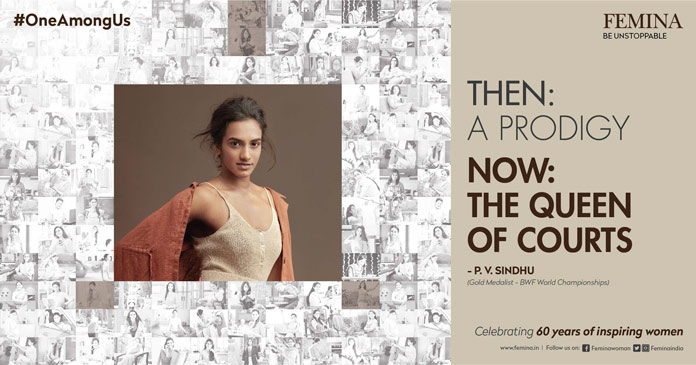 like Sushmita Sen winning the crown or Priyanka Chopra bringing it home. It will chronicle 60 such instances when Indian women were 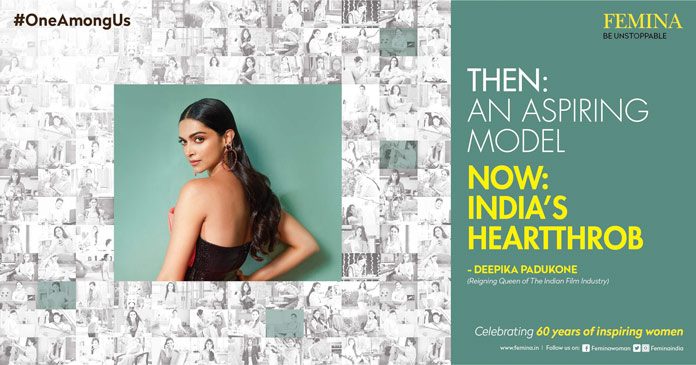 The issue has also become one of the most awaited and coveted pieces as stars from Bollywood like Ranveer Singh, Sara Ali Khan, Hrithik Roshan, Vicky Kaushal, Kriti Sanon, Twinkle Khanna, Taapsee Pannu and many others flock to social media to wish Femina a very happy birthday.

Deepak Lamba, CEO of Worldwide Media said, “With six decades of driving multiple format, content and cultural evolutions, Femina has constantly strived to connect with its audiences across platforms. As a result, the brand has now extended its entity as an omnipresent legacy brand to all the major touchpoints for Indian women, be it a TV show, social media platforms or any other relevant avenue of content consumption.

“While we’ve -completed six decades in the industry, the one that has not changed has been our core values. We have always put the interests of our consumers, in this case the Indian woman, at the heart of all our initiatives,” Lamba said.

Tanya Chaitanya, Editor and Chief Community Officer at Femina said, “It brings me immense pride and gratitude to have served 12 of the 60 glorious years under the Femina brand. It is no longer just a magazine but is an extended identity of any woman who stands for change, power, style, freedom and revolution. For our next 60 years, we will ensure that our platform and our brand stand to be an influencer, iconoclast, and innovator and nimble that women of our country can look up to.” 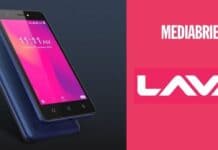 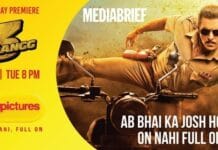 Dabangg 3 to premiere on &pictures this Republic Day 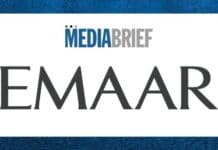 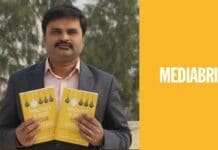 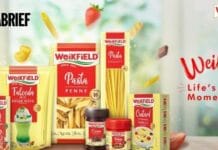 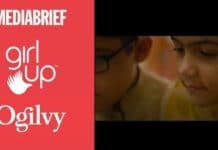 DigiBoxx offers 26 GB of free storage to users for taking...

An ode to artistry – Amazon Karigar’s ‘Handcrafted With Love’ campaign,...