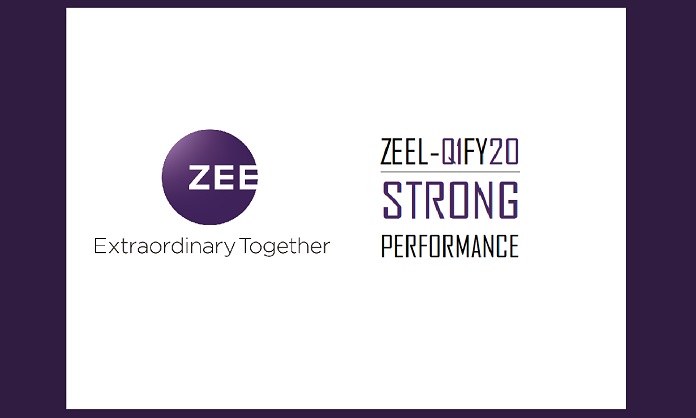 Zee Entertainment Enterprises Limited (ZEEL) [BSE: 505537, NSE: ZEEL.EQ] has put in a strong performance in Q1FY20, ending 30 June 2019, per unaudited consolidated financial results of the company and its subsidiaries which the Board of Directors approved and took on record when it met today.

For the first quarter of FY20, ZEEL reported consolidated revenue of Rs. 20,081 million. Earnings Before Interest, Tax, Depreciation and Amortization (EBITDA) was Rs. 6,598 million with an EBITDA margin of 32.9%. PAT for the quarter was Rs. 5,306 million.

Punit Goenka, Managing Director and CEO, ZEEL, commented, “We delivered another quarter of strong performance despite the operational challenges faced by the industry due to the implementation of TRAI tariff order. 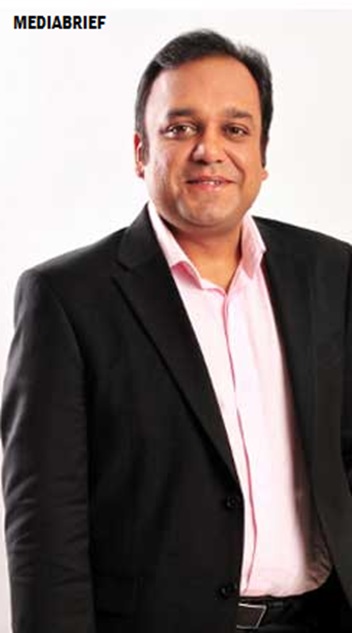 “We have witnessed a strong uptake of our channels across markets which is reflected in the 47% growth of our domestic subscription revenues. It validates our standing as the #1 entertainment network of the country, built on the foundation of strong position in each of the markets we operate in. We are confident that the new tariff regime is going to be beneficial for all the stakeholders and will greatly improve the consumer experience.

“Domestic advertising growth of 4.2% YoY is considerably lower than the growth in past quarters. This is primarily on account of the decision to convert our two leading FTA channels to pay, which significantly impacted the ad growth for the quarter. Additionally, the implementation of the new tariff order in the previous quarter negatively impacted reach and viewership of most entertainment channels, leading to a temporary shift in some of the ad spends from entertainment to sports. We believe that the underlying demand for advertising still remains strong and we are confident that spends would come back as the tariff order settles down and the festive season kicks in.

“ZEE5 continues its strong run and is working towards achieving its aim of becoming India’s #1 digital entertainment platform. In the international markets, it has seen an encouraging response in the initial phase. I am confident that with its strong content line-up and partnerships with leading players in the digital eco-system, value proposition of the platform and engagement with the consumers will continue to improve,” Goenka said.

During 1QFY20, ZEEL maintained its position as the #1 network in the non-sports entertainment segment with an all-India viewership share of 18.7%. The implementation of tariff order is impacting the reach and viewership of all the leading broadcast networks during the transition phase.

Additionally, the viewership was also impacted due to the conversion of two leading FTA channels into pay channels. Despite these developments, ZEEL continues to strengthen its position in the pay-TV ecosystem.

Zee TV was the #2 channel in the pay Hindi GEC segment, led by leadership in the core weekday primetime viewership band. The channel’s viewership experienced temporary weakness during the movement to the new tariff regime but saw an improvement towards the end of the quarter. ZEEL’s strong movie library helped further consolidate its #1 position in the pay Hindi movie genre.

ZEEL’s regional portfolio continued to gain traction across markets during the quarter. It maintained leadership position in the Marathi, Bangla and Kannada markets.

Zee Tamil continued to increase its market share on the back of strong performance of fiction shows.  ZEEL leadership has expressed confidence confident that with its consumer-centric approach and insight driven creative output, it will continue to build market share.

Zee Telugu and Zee Sarthak were the #2 channels during the quarter.

With an expanding line-up of exclusive content and tie-ups with partners in the digital eco-system, ZEE5 continued to strengthen its position as the go-to platform for on-demand entertainment.

ZEE5 continues to expand its catalogue of digital exclusive content to cater to its diverse consumer base. During the quarter, ZEE5 launched 18 Original shows and movies, of which 7 were in regional languages.

The platform is building it content library on the 3 Rs – Real, Relevant, and Resonant, and continues to experiment with new genres and concepts. Be it shows like Kaafir and Bombers (Hindi), Water Bottle (Bengali), Thiravam and Postman (Tamil) and movies like Badnaam Gali (Hindi), Onek Diner Pore (Bengali), ZEE5 aims to push the content boundaries across languages.

Many of these shows and movies were critically acclaimed and helped ZEE5 grow its paid subscriber base. To enable access to a wider consumer base, every original content is dubbed in six languages along with English subtitles.

With a growing catalogue of original content and premium movies, ZEE5 has established itself as an attractive destination for consumers looking for differentiated content.

ZEE5: Partnerships across the value chain

In its endeavor to reach a wider consumer base, ZEE5 is entering into partnerships with players across the digital eco-system.

ZEE5 is already integrated with all the major telecom networks and connected devices, driving higher reach and engagement. During the quarter, ZEE5 entered into partnership with Hathway and ACT Fibernet to offer bundled package to consumers.

To expand its footprint, ZEE5 has tied up with players in the online eco-system like Myntra, Qwikcilver, Netmeds and Gaana.com.

To improve the consumer experience, ZEE5 is collaborating with some of the leading OTT technology companies. ZEE5 announced a strategic partnership with Optimove to bolster the performance of the platform based on a suite of services backed by insight, engagement and optimisation.

It also announced a collaboration with Applicaster, one of the leading global cloud platforms for media app development and management in the media space.

Following the launch in priority APAC markets, ZEE5 commenced marketing activities in the neighbouring countries to leverage its language and content affinity.

ZEE5 is entering into partnerships across the region with several distribution platforms. To tap into the existing demand for Indian content in several markets, it also soft-launched dubbed content in 5 international languages. The roll-out in APAC will be followed by MENA, Europe, Canada and Caribbean markets.

Zee Studios, the movie production and distribution business, produced a Marathi movie, Rampaat, and distributed two Hindi movies – Article 15 and Tashkent Files in India. In addition, 5 films across 2 languages were distributed in the international territories during the quarter.

Zee Live launched Supermoon, starring one of the most popular international stand-up artists, Russell Peters. The event was held across Mumbai, Delhi and Bengaluru, and received good response from the audience. Zee Educare, a two-day education event was held in Delhi which saw participation from 40+ institutions.

The following table presents the consolidated financial statement of ZEEL and its subsidiaries for the first quarter of FY20: 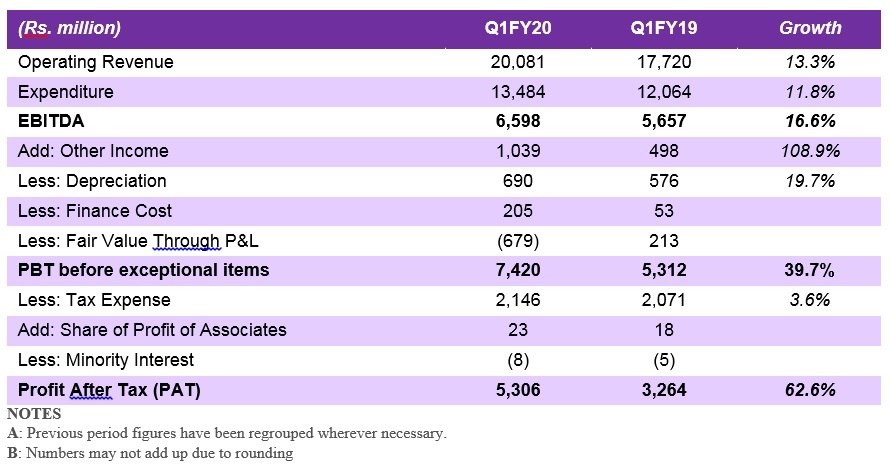 ZEEL has three sources of revenue – advertising, subscription and other sales and services. Other sales and services include revenues from its movie production business, music label, content syndication, and commission on sales amongst others. The following table contains break-down of consolidated revenues.

The domestic advertising revenue growth was slower than the previous quarters primarily due to the impact of two leading channels getting converted from free-to-air to pay channels, and therefore moving out of DD Freedish. Also, as the implementation of the tariff order was underway during the quarter, the reach and viewership of all entertainment networks got affected. Due to this uncertainty, some of the brands moved a part of their advertising spends temporarily to sports channels airing cricket events which promised a higher reach.

As the impact of tariff order normalizes and the festive season begins, the advertising growth is expected to return to its normal trajectory.

The implementation of the new tariff order has led to better monetization of  ZEEL’s viewership, which explains the step jump in domestic subscription revenue growth. Over the years, ZEEL’s broadcast business has built leadership positions across markets which has resulted in strong uptake of our channels and bouquets under the new tariff order. The order has allowed ZEEL to price its channels in line with their popularity, leading to a sharp improvement in subscription revenues, especially in the southern markets.

Programming cost for the quarter increased by 16.7% YoY to Rs. 7,800 million. This increase was primarily driven by content cost for ZEE5 and higher movie amortization costs for ZEEL’s  Hindi and regional channel portfolio.

Advertising, Publicity and Other expenses at Rs. 3,680 million were flat on a YoY basis.

Higher marketing and promotion costs for ZEE5, both in India and in International markets, led to higher A&P expenses during the quarter.