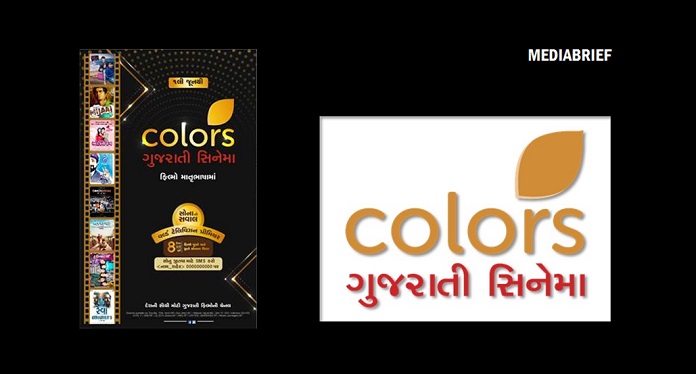 Viacom18 Media Pvt. Ltd.has announced the launch of COLORS Gujarati Cinema, the region’s first 24-hour premium movies’ channel with the tagline of Filmo Matrubhasha Ma, which translates into Movies In Your Mother-Tongue.  The channel will seek to leverage the vibrant cinematic heritage of Gujarat. Following the success of COLORS Kannada Cinema, Viacom18’s latest foray into regional movie broadcast – COLORS Gujarati Cinema – will launch on June 1st, 2019 as a pay channel. It will be a part of the network’s primary COLORS wala Value+ Pack. 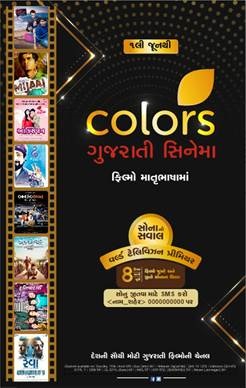 Front-lined by Gujarati cinematic masterpieces such as Viacom18 Studios’ Dhh which won the National Award for best feature film in Gujarati and recent hits like Chello Divas, Love ni Bhavai, Reva, Mijaj, Duniyadari, Oxygen, Backbencher and a library of 300+ Gujarati films that have won hearts of more than 6 crore audiences, COLORS Gujarati Cinema will enthrall its audience with world television premieres, behind-the-scenes footage, songs, comedy marathons and a plethora of Gujarati plays.

The channel will showcase movies across genres such as Action, Drama, Comedy, Romance, Mythology and many more. With the launch of COLORS Gujarati Cinema, the network aims to promote Gujarati culture, heritage and splendor and familiarize its viewers with Gujarati stories and folklores.

The network is planning a 360-degree marketing campaign across pre-launch, launch and sustenance phases. The state will see major print and radio campaigns across all major publications and stations.

Marketing campaign will be headlined by an industry-first RAP anthem which has been shot with popular Gujarati actor Jimit Trivedi to capture the pulse of the youth.

An OOH campaign across 23 major towns of Gujarat and a television campaign across COLORS Gujarati and the market’s top non-network channels will see an ad blitzkrieg with 1000 spots aired.

In a marketing tie-up that brings unprecedented scale to the launch, COLORS Gujarati Cinema will run an in-theatre campaign that will launch with Salman Khan’s upcoming Bharat.

Sudhanshu Vats, Group CEO & Managing Director, Viacom18, said, “Four years ago we consolidated and rebranded our play in regional TV broadcast under the COLORS umbrella. Since then not only have we added 7 more channels but also entered new markets through our broadcast, digital and films businesses. Over the last 2 years our regional cluster has grown at a CAGR of 36.5% in viewership and 22% in revenue.

Gujarat presents a unique opportunity for us as we can leverage our regional GEC COLORS Gujarati’s strong 43% market share position and capture a current whitespace in the market – movie broadcast.”

Ravish Kumar, Head – Regional TV Network, Viacom18, said, ‘’Gujarati language has clocked the highest growth rate amongst all language TV viewership with an astounding 36% year-on-year growth. Movies as a TV genre enjoy 25% viewership in Gujarat, a state with an 87-year-old legacy of producing films and plays. With the absence of a premium television channel showcasing Gujarati movies, it was the perfect whitespace for us to capture. Not only does COLORS Gujarati Cinema provide for a business case but also allows us to give the people of Gujarat a destination to enjoy movies in their mother-tongue.

“With COLORS Gujarati Cinema, we aim to respond to the regional market’s appetite for high-quality content while retaining its socio-cultural identity through a rich library of 300+ films and plays.”

Viacom18’s journey of delighting the Gujarati audience began almost 18 years back with the purpose of providing authentic Gujarati entertainment to its viewers. Evolving from ETV Gujarati to COLORS Gujarati, the channel has been the No. 1 Gujarati General Entertainment Channel and has been catering to audiences across the spectrum. COLORS Gujarati Cinema, Viacom18’s third movies’ channel, will hopefully keep up the network’s commitment to provide best in class regional entertainment to its audience. 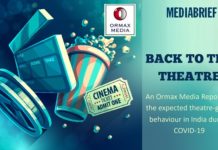 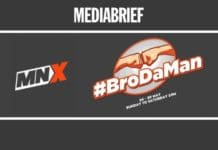 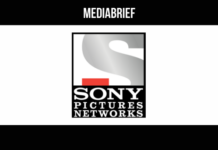 SPSN bringing fans the best sporting action from around the world