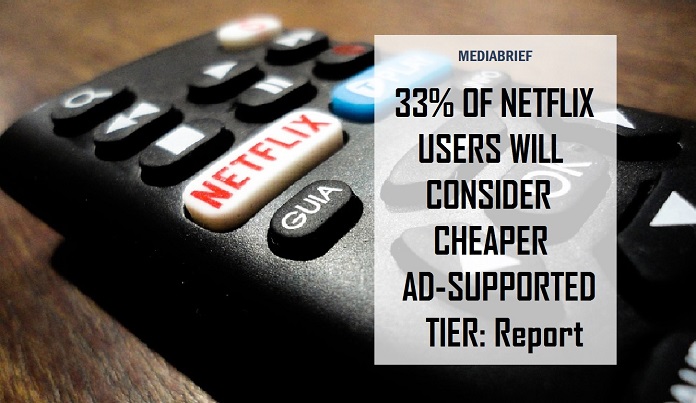 If Netflix – in spite of its repeated denials on the subject – were to actually go ahead and introduce a less-expensive, ad-based tier, how many Netflix users from US Broadband homes would switch to it? A third of them, says research from TDG,  would consider changing tiers, more than half of which are moderately likely to or definitely would switch.

Will Netflix introduce an ad-based tier? There’s a combination of compelling reasons that indicate it will, and sooner rather than later. First, there’s the mounting competition and pressure from Disney, Warner, Amazon and Apple. Apple is set to launch its originals-only-driven Apple TV in the US soon, and NBC Universal will take off The Office, and Warner Media will pull off Friends – both mainstays in Netflix’s Top 20 programs by time watched per Nielsen, which also reported that only six of those Top 20 were originals.

In fact, after NBC Universal announced The Office would be off Netflix after January 2021, Netflix did tweet saying “members can binge watch the show to their hearts’ content ad-free on Netflix until January 2021”. But of course, the need of the hour is for Netflix to pull up its originals socks, as it were, and start building a warchest of original content.

More problems there, though: today, streaming-content budgets rival those of movies in Hollywood, and Netflix is due to pay more than 20 billion USD from cost obligations – as reportedly estimated by Stifel – over the next three years.

While Netflix has consistently spurned ads, the decision is not entirely within its control,  says Michael Greeson, President of TDG and Senior Vice President of Screen Engine/ASI. In the next year, many of Netflix’s most-viewed shows will disappear from its library, as networks like Disney and WarnerMedia reclaim their high-value titles in order to populate their own DTC services. 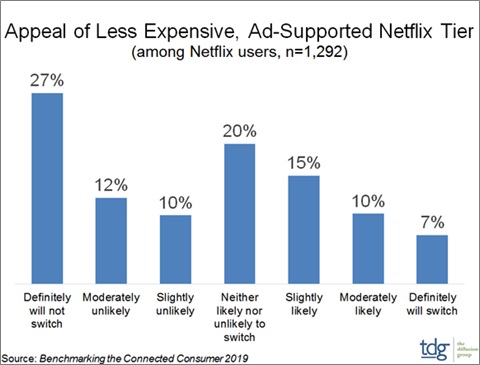 While top of mind among Netflix executives, awareness does not logically entail timely, correct action. “Netflix’s response to its thinning third-party library is to spend more on originals, which it’s gambling will keep subscribers from jumping ship. But with half or more of its most-viewed shows being owned by three studios, each of which is launching their own DTC services, how long can you convince 55+ million US consumers that your service is worth paying a premium price, especially compared with Hulu (offers an ad-based option), Amazon Prime Video (free with Prime), and Disney+ (coming in a $6.99/month)?”

Given this context, and in order to offset mounting costs and pressure from investors to begin paying down debt, Netflix will need to (1) increase the retail prices of subscriptions (which it recently did), or (2) create a new revenue stream, such as advertising.

“This should not be an either/or decision, but that’s what it is,” says Greeson. TDG’s research from late 2018 found that Netflix’s most recent price increase strained the limit of the service’s value, even before popular third-party shows are pulled from the lineup. When this happens, short-term domestic price increases will be difficult if not impossible without deleterious results.

As with Blockbuster in the 2000s, Netflix has long enjoyed dominance in its market space, producing a bit of over-confidence and an embedded resistance to change. Given shifting competitive conditions, however, flexibility is essential — something with which Netflix has limited experience. Like Blockbuster, it largely defined its space, set the rules, and long since reigned. “But the stage is shifting,” says Greeson, “and if, like Blockbuster, Netflix fails to evolve in a timely fashion, the company may see its domestic fortunes reversed.”

On the other hand, Netflix could bend a bit and launch a less expensive ad-subsidized tier, something that Greeson predicts will happen in the next 18 months. “Ads will become an important part of a comprehensive tiering strategy that helps bullet-proof Netflix for years to come.”

The appeal of a less-expensive ad-based Netflix tier is but one component of TDG’s ninth annual Benchmarking the Connected Consumer study, a comprehensive profile of the devices and services used in the US broadband home. 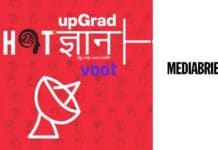